At the Northland Festivals Annual Meeting on September 27, 2022, held at Paul and Jacks and also online via Zoom, the 2023 Snake Saturday Parade and Festivals Theme was announced. The 39th Annual Parade and Festival theme is “Super Shimmering Shamrock”. The parade and festival will be held on March 11, 2023. 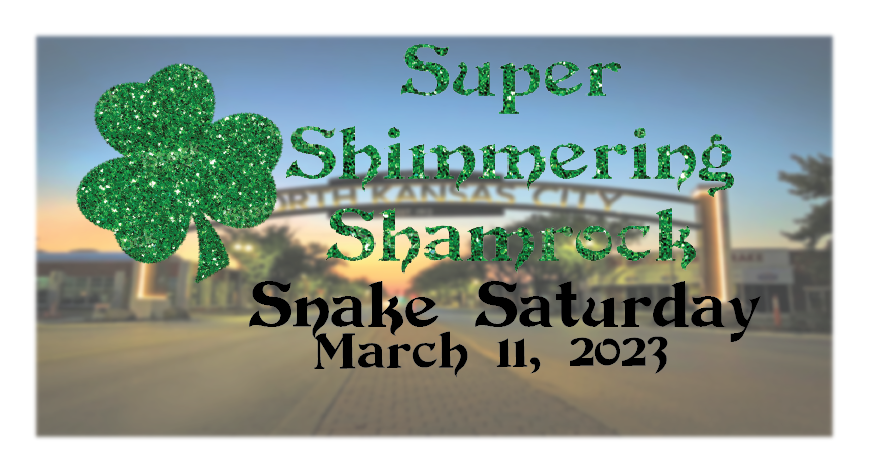 Super Shimmering Shamrock is appropriate for an event which has spanned almost 4 decades and is always held the Saturday before St. Patrick’s Day. The parade kicks off at 11 a.m. but there have been events added over the years which are part of the entire Snake Saturday fun. The Grand Marshal Celebration kicks off Snake Saturday week. This event will be on March 2 at the Voo Doo Lounge at Harrahs Hotel and Casino. The Grand Marshal is announced, and the Shamrock Award is presented to an individual with long-term involvement of at least five years with Snake Saturday through time and/or money, either from the Boards, Committees, or Sponsorship.

Twenty-seven years ago, another event was started, the annual Charity Cook-Off. The Charity Cook–Off is held the Friday night before the parade. This is a fund raiser for various 501c3 organizations and all they must do is simply cook a provided a meat which is then judged by an expert panel of Snake Saturday sponsors, officials, and North Kansas City celebrities. The overall winner receives $1,000 prize.

These events lead to the big day of Snake Saturday. North Kansas City awakes early on Snake Saturday, floats are arriving and staging for the 11 a.m. kick off along Swift Avenue. The festival area is for families to participate before, during, and after the parade with a carnival and various children’s activities. The Clyde Ellis race car show is provided by the Central Auto Racing Boosters, and various other activities including a bicycle giveaway.

The parade usually has about 60 plus charities, six high school bands, and any number of gorgeous floats, which distinguishes this parade from other parades throughout the country. The parade typically takes about two hours to watch. Another advantage to this parade is the amount of money given back to the charities. Northland Festivals spreads the money around so that every not-for-profit which takes part in the parade walks away with money. Through the 2022 parade over 1.7 million has been given away. All this win-win effort can be traced to the sponsors and the Northland Festivals family friendly staff.

From the beginning the parade goal has been to be very family-friendly. Northland Festivals desires to not only provide two hours of entertainment with the parade, but have something for the family to do the rest of the day as well. To enter a float in the parade, enter a lad or lassie, enter a charity cookoff team, or purchase tickets for the Grand Marshal Celebration visit our website, www.snakesaturday.com, Registration Opens December 1st, 2022.

Super Shimmering Shamrock is coming March 11, 2023, let’s have some fun!